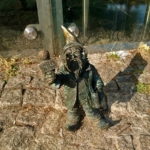 In June 2018 I spent three weeks traveling through Poland, Germany, Holland and Belgium.

Last year, on my trip to Portugal, I always planned one or two days in advance and booked accommodation. In the end it was pretty stressful, because I had to be somewhere every day and there was little room for spontaneity.

This time I wanted to avoid this stress and just drove off. I only had three appointments on this trip:
– to get in touch again with relatives of my grandmother and great-grandmother in northern Germany After a long time
– stop by at a friend in Berlin and
– to visit my Dutch friends Renate and Bart, who already are known by regular readers of my blog

Everything in between was unplanned. 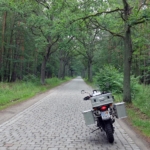 In the first week I drove through Poland. I had little idea of Poland.
There was just a picture in my head ..
– what I learned in history lessons in school
– In my childhood, the Poles were prejudiced for stealing cars. Before my trip, jokes were made about it, especially by the older generation.
– Foreign workers who came to Austria.
– a business trip to Warsaw many years ago. I still remember rainy weather and post-communist architecture.
So my picture of Poland was gray and a bit oppressed. 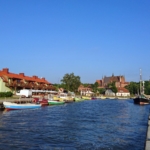 Reality was very different. I do not know why I did not visit Poland before. I guess a lot of people don’t do things because of prejudices, that have been taught them by others earlier in life.
The best thing you can do is, to destroy these prejudices and adjust the picture through your own experiences.

First I drove northeast to Wroclaw, Koronowo and Mragowo in the Masuria and then along the coast of the North Sea west, Frauenburg, Danzig, Ustka, Międzyzdroje.

The weather was very sunny and warm and riding was a sheer pleasure. There was hardly any traffic on the small, 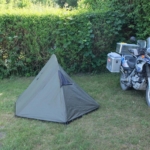 single-lane, country roads, which often are lined with trees.
The Masurian Lake District is a scenic area that definitely should be visited and the coast along the North Sea is ideal for cycling and swimming.
There are a lot campsites in Poland and because of the warm weather, I camped most of the time.

In Berlin it was a bit stressful. After a week outdoors where I had little traffic and no people, I had to be careful not to run into people or getting hit by bicycles or cars.

With Agnes, a friend who lives in Berlin, I was paddling for two days in the Spreewald. A beautiful area, which is criss-crossed by canals and can be reached by train from Berlin in just 1 hour. Which makes it a good opportunity for a day trip. 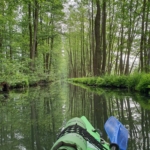 A local person told me, in winter when the canals are frozen, people skate there. This mus be great.
When I asked, if it is not dangerous to break in, I was told, because of the shallow depth of the water: “People who drown in the Spreewald are just too lazy to get up.”

After Berlin I headed towards the Danish border, where relatives of my great-grandmother and grandmother live, and then to the Netherlands, where I met Renate and Bart again.

The penultimate station was Bruges in Belgium.
On the way there with an incident. I already had some difficulties for a few days. The motorcycle has repeatedly died when I stopped at traffic lights or intersections. 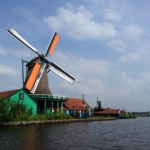 Somewhere between Amsterdam and Bruges I took a break and the bike did not start anymore.
The battery seemed to be completely empty. I just thought: Damn, I hope the alternator is not broken.
Fortunately, not more than 100 meters there was a farm and campsite. I pushed my bike over there and started to uncover the battery.
The contacts of the battery were very dirty. The paste that was supposed to protect the contacts was completely crystallized.
I cleaned everything. Meanwhile, the owner came. He borrowed me screwdrivers and gave me a jump start with his car. But as soon as I took the cables off the battery, the bike died immediately.
I thought the battery must be broken and prepared to stay at the campsite. It was Sunday.
The owner told me, that there is a car and motorcycle accessory shop in the next city about 20-30km down the road and he can drive me there the next day. 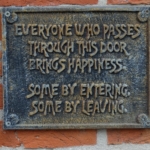 One last time I pressed the Start button, a small flash of the instruments.
I thought maybe it’s the battery contacts that are not quite clean yet. Again I uncovered the battery and cleaned the contacts as good as possible.
I told the owner: We try it one last time and then it’s over.
The bike was running and kept running when taking away the jump start cables. I was really happy. I drove around a little bit, everything seemed ok.
After putting everything back on my bike, I asked what I owe. He just meant: “A smile.”
I did not dare to stop until I was in front of the hostel in Bruges. The battery broke anyway a few weeks later.

In Bruges, the infrastructure is designed and built for cyclists. Generous bike paths run through the whole city.
However, I found cyclists arrogant opposite to other road users, were it pedestrians or cars, as if they have unrestricted priority everywhere. Maybe I’m wrong. 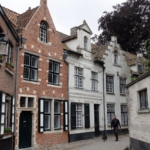 It was also interesting to see, that water traffic is equal to road traffic. Bridges are raised every 10 to 15 minutes for the ships to pass through the canals.

In the morning, I was on my way home, but still in Belgium, I got a message.
Another part of our relatives, who live more in the middle of Germany, heard, that I am on the road and said, it would be very impolite, if I do not stop a their place. So I adjusted my route a bit and had a very nice stopover near Fulda.

All in all, it was a very relaxed trip, where I saw new parts of Europe and I spent a good time with relatives and friends.