Of course, I’m sorry that I had to quit my journey – but 8 1/2 months were anyway a long time. I really wish, I could have made it to Alaska and back to the east coast of Canada. There were so many things I wanted to do. But I see the accident and my sudden return not as the end of my trip(s), just as an interruption. And someday I’ll bring the tour to an end. Because, after a trip is before the next one. :-)
By now I’ve visited a lot of countries. I was traveling alone or with friends, with a backpack, with a suitcase, by public transport or by car, rented or bought. But this journey was completely different from what I’ve done so far.
It was a whole new experience. I was exposed to the forces of nature like never before and I have come very close to the people. I experienced more than I ever could have had imagined. I have met many many people and made new friends. It was not at all an all-inclusive cruise, very often it was a big challenge. It was a huge adventure – and certainly not the last one.
So many times I’ve driven through a landscape that I could not get enough, but it was especially the encounters with other people, who made my trip an exceptional experience.

Thank you for a wonderful time to

– Esra and Paul, my dear long-time friends in Montreal, who gave me a funny weekend at the amusement park and a picnic.

– Tino, from Germany in Austin, still on the road around the world. 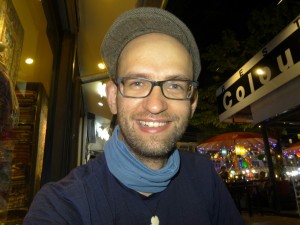 – Renate and Bart, with whom I had unforgettable experiences with (corrupt) police in Honduras and Nicaragua. We met in Bogota and, with Andi, in Mendoza again. It was not the last time. 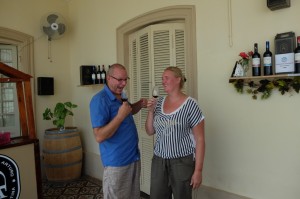 – Tobias, from Germany, whom I met in the Hostel in Panama. Unfortunately, we missed each other in Argentina. I hope the troubles with his KTM are over. 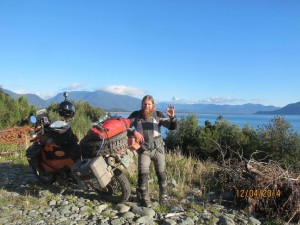 – Carolina in Bogota, with whom I have spent a nice time and who told me a lot about life in Bogota .. and we went to a Cafe where they had Austrian donuts. 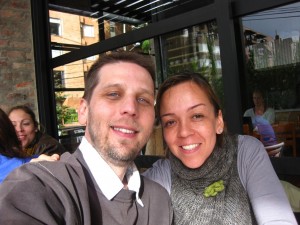 – Lauren and Adrian from Australia. I have “only” met them at the airport in Bogota, when we picked up our bikes. We were constantly in mail contact, but unfortunately we did not meet again as we were always 2 or 3 days apart.

– Maurico, Laura, Joaquin and Santiago near Talca. Maricio was a mechanic. After my battery broke down, they gave me to eat and shelter. It was a very special experience. 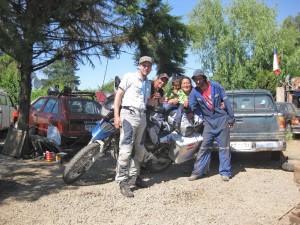 – Judy and Steve, a wonderful couple. I met them repeatedly in Patagonia. They made their trip with a Harley. Our time together was marked with breakdowns and struggles, but will never be forgotten. I do not regret a second that I was traveling with you. 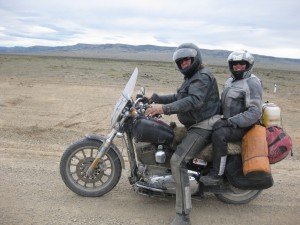 – my dear friend Andi. Who went with me to the End of the World. With him, it were truly 2 1/2 adventurous months in Chile, Argentina and Bolivia. Poor Andi had 7 flat tires .. and I had none. 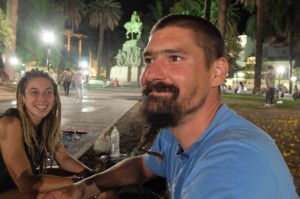 – Rosi and Alf, two really nice people. Andi and I met them first in Ushuaia, then by accident on the Carretera Austral. We traveled with them for three days and had a really rough ride on the Lago Buenos Aires to the Marble Caves. Last time we met in Cusco again. 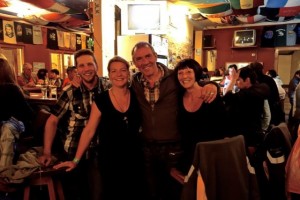 – Hitch and Lee, the „crazy“ guys from New Zealand, which we met in Punta Arenas and with whom we celebrated the New Year in El Calafate. 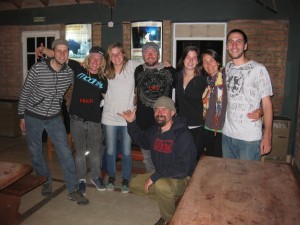 – Steve Harpt, “Crazy Steve“, from Botswana. Andi and I met him for the first time on the ferry from Porvenier to Punta Arenas. He accidentally passed by, when Andi had his first flat tire. We will see you in Botswana again Steve .. or somewhere else. 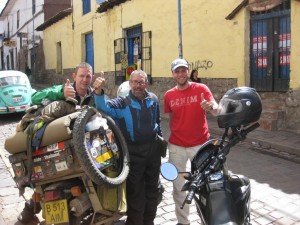 – Marisol, Maria and all the others in the hostel in San Rafael – unfortunately I can not remember all your names. Thank you for teaching me „Truco“. It was one of the funniest nights on my trip. 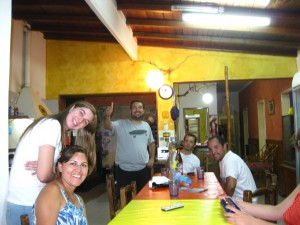 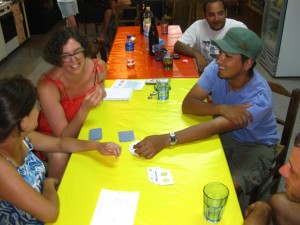 – Eli, the poker player from the States. It was a really good time with you in Bariloche. 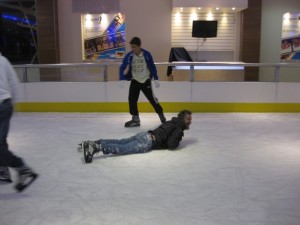 – Steve Knight, who lives on an island close to Vancouver, Mikey, who was most recently stationed in the US army in Alaska and Taylor, from Seattle. Andi and I where traveling with them for a couple of days in Bolivia to Lake Uyuni and a few days in Chile, to Santiago. Lake Uyuni is unforgettable, also Taylor’s crash – man was he lucky that he did not get hurt.

– Günther from Austria. I met him only for a few minutes in a hostel in Valdivia. He was extremely helpful, when it came to repair my radiator.
– Marco and Silvia, good friends of Günther. They are very nice people and gave me warm welcome in Santiago.

– Peter, from Germany, with whom I’ve spent some nice evenings in bars. We still “argue” who is to blame for too many drinks. I am looking forward to seeing you again. 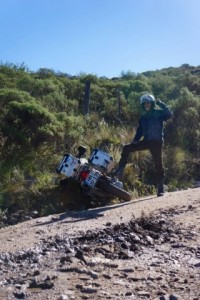 A special thank goes out to the people who helped me after my accident in Lima.
– Humberto, in 511 Lima Hostel
– Bart and Faizal, who gave me the contact to Harald. Harald was extremely helpful. He organized to pick up my motorcycle from then police station and the transport home. 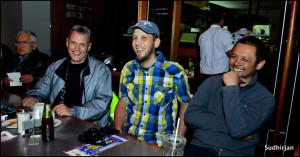 And last but not least Kerstin, who stayed at my side the day after my accident. She made me often laugh with her bright nature .. which was not always good for my ribs. ;-) 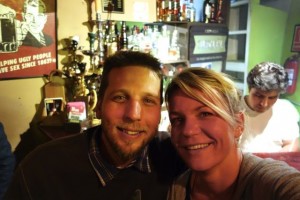 Also thanks to all the other people I’ve met on the road, whose names I can not remember or that I never knew  – there were so many people and places – for chatting only for a few minutes, hours, or spending a funny night or days in a hostel, in pubs or bars, … .

Thanks to my readers too, who have accompanied me on my journey. You gave my blog a life.

Well, so I finish this trip.
The next one is already in my mind.